This summer have just flown by so fast. All those days I marked in my calendar in the beginning of June – The weekend in Gothenburg, the last day at work (for the second time) and our trip to Belgium are just moments away now. I’ts been a good one so far I would say. I’ve managed to ground down after the massive change of going back to school, it took me a while to get used to it again after 6 years away.

To be honest, it haven’t been that much cooking going on in my kitchen this summer. I just can’t be bothered to prepare anything that takes longer than 15 minuets and most of the time we have been ending up eating salads, fruit and sandwiches. But so one day last week when I had a day off I found myself in the kitchen baking. I always bake when I’m having a bad day – not that this day was catastrophic. It was just one of those days you want to crawl under the blanket and sleep all day and since that is not particularly productive I decided to bake these buns instead (and then eat then under a blanket in my bed, but thats a whole other story). 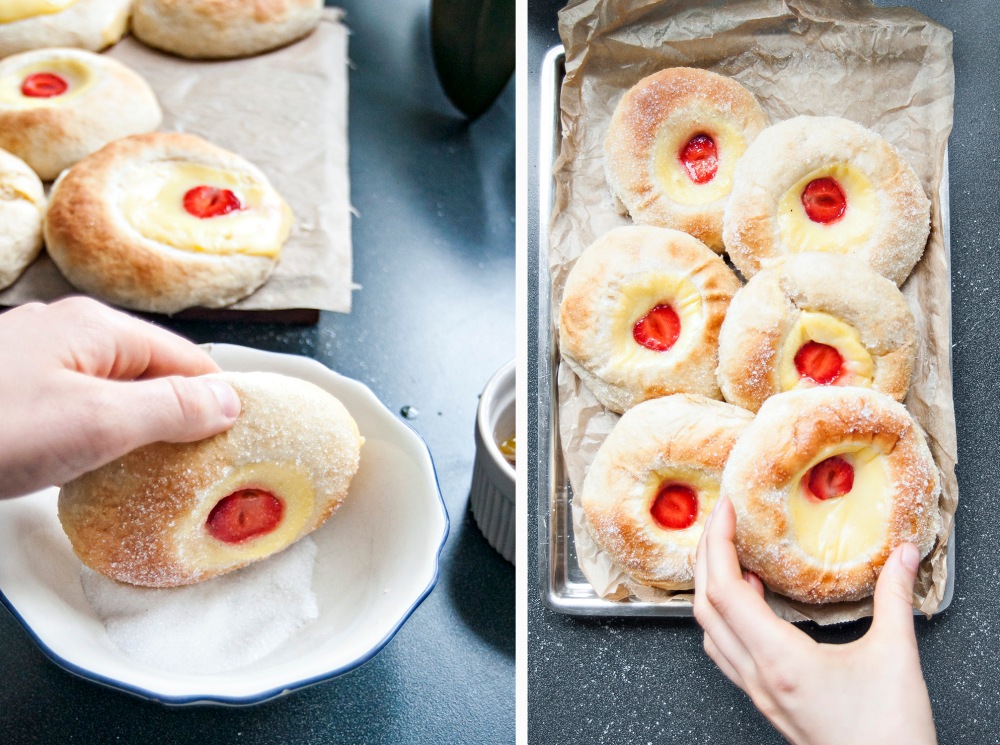 The sunshine bun have so many different names here in Sweden – vanilla buns, sugar buns, sailor buns or Paris buns. All exactly the same and just utterly delicious. Soft and pillowy dough with cardamom accompanied by a smooth and silky custard makes the perfect partner to a cup of coffee or strawberry fruit drink.

Do this;
Cut the vanilla pod in half and scrape out all of the seeds. Add both the pod and the seeds in a pan together with the milk. Allow to boil, but whisk occasionally to avoid it burning. Set aside.

In a bowl – whisk together the sugar, egg yolks and maizena until white and fluffy. Pour in the hot milk during constant whisking. Add the mixture back in the pan and let carefully heat up (don’t allow it to boil). As soon as the custard thickens pour it into a cold bowl, add in the butter and let it melt. Let the custard could down completely in the fridge.

Do this;
Cut the butter into small cubes and crumble the year into a bowl. Grind the cardamom pods in a mortar and pestle and add it into a pan together with the milk until it reaches 37 degrees. Pour the milk over the yeast to dissolve the it.

Add in the sugar, salt, butter and the egg and let it combine before adding in the flour bit by bit, kneading thoroughly. The dough is ready just before it starts to release from the sides of the bowl and should still be relatively sticky. Cover the bowl with a tea-towel to prove for 40 minutes.

Pour the dough out on a floured surface. Cut it into 16 equal sized bits and shape them into small buns. Place them on a baking tray covered with baking paper (leave room for them to expand), cover with a tea-towel and prove until they have doubled in size, around 30-40 minutes.

Preheat the oven to 200 degrees. Place the custard into a piping bag, poke a hole in the middle of the bun with the piping bag and fill it with custard. This needs to be done relatively fast since the buns will collapse otherwise. Add half a strawberry in the custard and bake for around 7-8 min until golden. Allow the buns to cool down for 15 min before brushing them with melted butter and roll them in sugar without covering the custard.